Hey-it’s ‘Play Time!’ said David Lynch, the EB Games Port Central Manager who arrived at the specialist games chain by way of being a customer. He says he grew up with games, starting with Sega Mega Drive. “I love coming to work,” David said. “I actually get to go to a twice-yearly conference where we get to play all new and upcoming games.” David Lynch, a keen gamer who has been working at EB Games for over 5 years, says he has a great team at EB Games and love sharing the work and the fun. David said the last year had been a lot busier than the previous one and they were seeing more advanced technology and a lot more variety in games, which were now catering to kids as well as adults. “Older people love the hidden objects games – we get people in their 70s coming in,” David said.“DS games are pretty popular – DS consoles start from $59 pre-owned and don’t forget we trade iPods and all colour screen phones in working order” David and his team pride themselves on providing excellent customer service and they are always up for a friendly chat with customers! EB Games Port Central is open seven days a week! 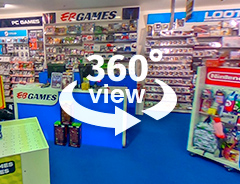 Looking for a specific store? Search our directory here.